I’m a founder member of Peter Tavy Guild which we set up in 1997. The guild grew out of a spinning and weaving project set up in Peter Tavy with funding from Villages In Action. The workshops were led by artist weaver Bobbie Cox, who was very generous in her support and encouragement to us.
During much of 2019 my main focus was the organisation of, and participation in Peter Tavy guild’s biennial exhibition ‘The Wandering Thread’. As a tribute to Bobbie, who sadly died the previous year, I set up a new tapestry project, and began teaching tapestry weaving to over 35 guild members….the enthusiasm was quite overwhelming!
The work we produced was displayed alongside some of Bobbie’s own work which was kindly loaned by her family, and which formed one half of our exhibition in October 2019. 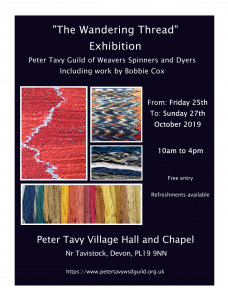 ——————————————————————–
I have also been a member of Drawn to the Valley – a group of artists based around the Tamar Valley for several years.
Together we take part in Open Studio events, exhibitions and drawing days.

This is a group I joined fairly recently when I began making woven tapestry again. 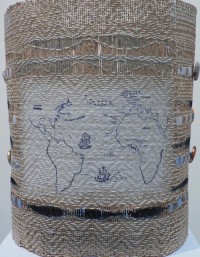 You can see some more examples of my work on my Gallery page.